Award-winning campaign Friends of the Joiners Arms [1] invite you to LESE-MAJESTE, a late night party with an all-female/non-binary line-up.

Friends of the Joiners Arms announce Joiners On The Road – Lese-Majeste, the latest installment in a pioneering series of parties to fight back against the disappearance of our queer spaces [2]. ‘Lese-Majeste’ features an incredible all womxn/non-binary line-up of drag kings and DJs to prove there’s more to queer London than Ru references and tucking. 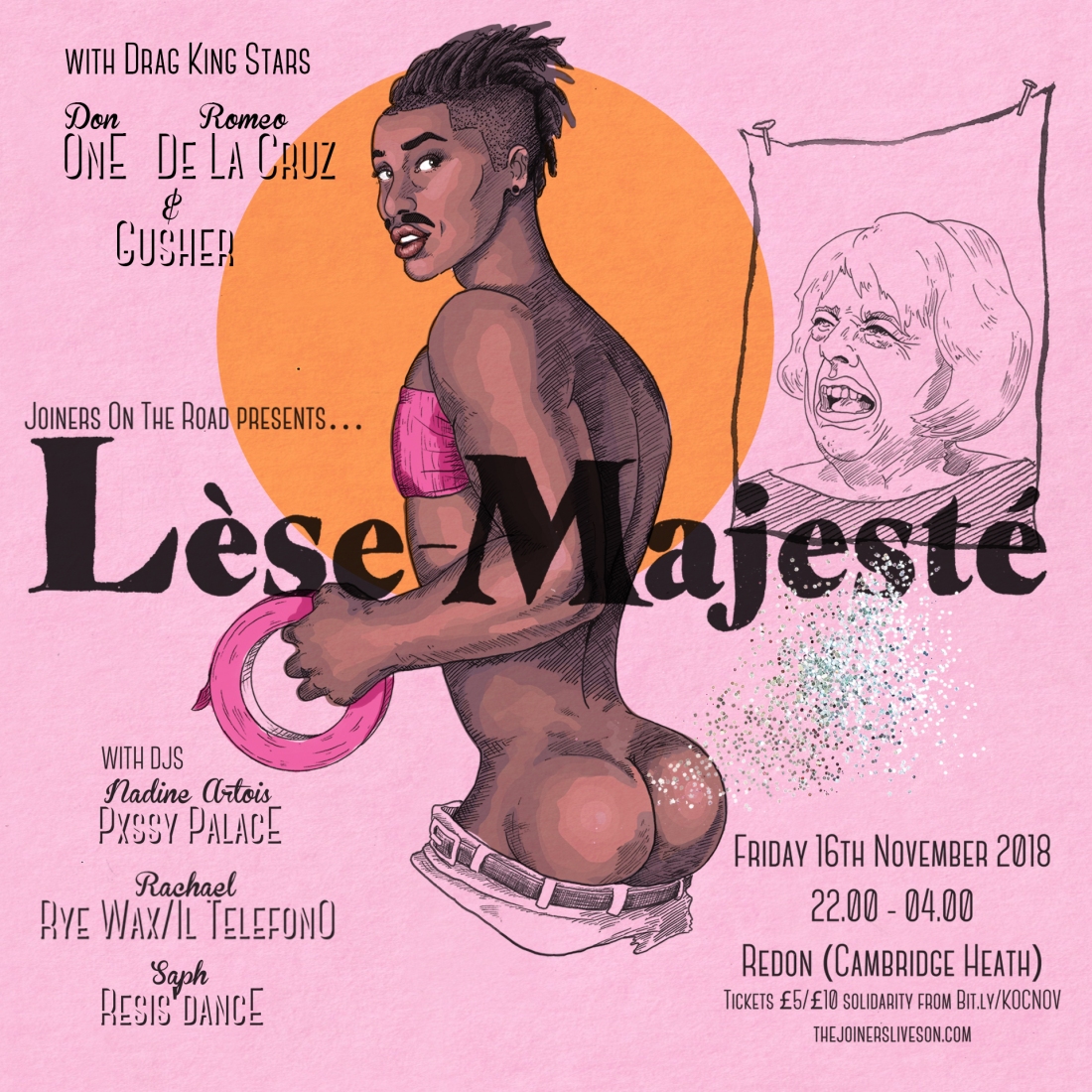 The party will be held on Friday, November 16 2018 from 10pm to 4am at Redon (Cambridge Heath). It feature live performances from drag kings DON ONE and ROMEO DE LA CRUZ, along with DJ sets from Saph (Resis’dance), Rachael (Rye Wax/II Telefono), Nadine Artois (Pxssy Palace) and DJ TrYB (Heaven, Gold Teeth & Pxssy Palace).

Tickets start at £5 and are available here bit.ly/KOCNOV Any profits will go towards the campaign to open London’s first community-run LGBTQ+ pub, on the site of the legendary Joiners Arms [3]. The group are offering guestlist places are available for those who are low/unwaged [4]

Amy Roberts, co-chair of Friends of the Joiners Arms, said

“Lese-majeste – mocking the king or queen – was an act of treason, and we want to create our own radical, transgressive party to mock the powers-that-be. So we’re holding a party where the line-up is all womxn/non-binary. It’s crazy to think that this is radical in London 2018, but in a ‘world city’ with only one lesbian bar, this is treasonous, transgressive and hopefully triumphant!”

Olimpia Burchiellaro, campaigner with Friends of the Joiners Arms, said:

“Now that we’ve secured a historic planning condition to secure a replacement LGBTQI venue on the site of the former Joiners Arms, we’re building our community and our skills by putting on some banging parties. Joiners On The Road is our series of nights which we’ll be running till we open a permanent venue. Our aim is to be inclusive, accessible, and radical – and to try to serve those parts of our community who are routinely marginalised even in the queer world.”

“Romeo has no other mission than to mx their craft of dance, lip-syncing and fetlesque to produce the twistxd concoction of De La Cruz…if you’re lucky you might just experience the comedic side of this simulating King!”

[1] Friends of the Joiners Arms is a community group that has been campaigning since 2014 to prevent the loss of queer spaces. They are now registered as a Community Benefit Society (a non-profit community structure) with a view to creating London’s first community-run LGBTQI pub. In March 2018, they were awarded ‘Community Campaign of the Year’ by the SMK Foundation.

[2] According to research published by UCL’s Urban Lab, London lost 58% of LGBTQI venues between 2006 – 2016. Full details are here http://www.ucl.ac.uk/urbanlab/research/lgbtqi-space

[4] The group have asked that anyone who requires a low/unwaged guestlist place emails them on  thejoinersliveson@gmail.com